Tree of the Day No. 1: Japanese Tree Lilac (Syringa reticulate) 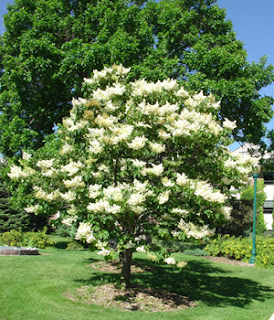 As I already mentioned—I have a thing for trees. And, because of this “thing," I want to dedicate a post every now and then to regurgitating information I’ve learned about a specific type of tree, interwoven with my own musings and anecdotes about the post’s chosen species. And, contrary to the title I've selected for this reoccurring "segment," I'm not going to write about a new tree every single day. I may have spent the last two hours making sure my images link to my Pinterest account (which I later undid), but I actually do have a life outside of the cyber-realm. Now that the explanations are out of the way, shall we proceed?

The Japanese Tree Lilac is the largest species of lilac and can grow to a height of 12 meters (and, in rare cases, 15 meters). Now, I may be a Canadian, but I’ve never been a fan of the metric system and my aversion to it was only increased when the architectural technology instructors at NAIT allowed us to substitute in the imperial system on our working drawings. So, for all you fellow imperialists (yes, I realize I’m stretching the meaning of the term), that means a mature JTL will stand at about 30 to 50 feet. Did I not warn you in the previous post there would be meandering?

The JTL is the only species of lilac “that regularly makes a small tree rather than a shrub.” I’m not quite sure what that sentence from Wikipedia is trying to convey, but I do remember reading in Lois Hole’s Favorite Trees and Shrubs that a JTL can be pruned so that it takes the shape of a tree instead of a shrub, which is its natural form.

I would say the Japanese Tree Lilac is one of my favorite, if not my absolute favorite tree of all time (no offense to all of the other lovely tree types out there—don’t fret, I’ll expound on the glories of you in later posts). This is mostly due to the smell of its flowers. I’ve always adored the smell of lilacs. As a kid, the neighbors two doors down from my house had a hedge of purple lilacs (Syringa vulgaris aka the common lilac) that I spent a fair amount of time hovering over and inhaling. Whenever I get a whiff of a lilac’s “musk-scented” flower (that less-than-appealing fragrance description brought to you by Lois Hole), I stop in my tracks and pivot until I spot the source. Quite often I end up with my nose touching the petals, meaning the blossoms actually enter my nostrils when I breathe in. There’s a magnificent Japanese Tree Lilac on the University of Alberta campus over by the Earth Sciences building that I would take a picture of and post here, but alas—as with all good things—the JTL is only in bloom for a very brief window during summer. It being November now, and there being snow on the ground as I type this, means that— while still beautiful—the University’s tree is flowerless and thus, kind of sad.

Aside from the JTL’s scent, which I’m quite certain I’ve dedicated enough time to discussing, the creamy ivory colour of its flowers is another thing I love. I know that most people like flowers for their wide variety of colour, and often they will try and have as many shades in their yard as they can, but I admit I have a thing for plain white flowers. I’m pretty obsessive when it comes to things being organized and tidy and I often fantasize about the consistency of a monochromatic garden. And—surprise, surprise—a quick shot over to Google has proven, once again, that every idea I’ve ever had was thought up by someone else first. 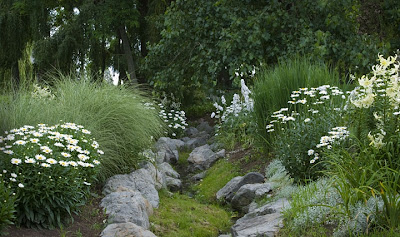 I swear I equally embrace all colours of the rainbow (well, except for pink—my apologies to three year old girls, but I just ain't a fan).

The road that will one day lead to our new house was only just built, but I’ve already decided that I’m going to plant a Japanese Tree Lilac in the centre of the turnaround. Of course, there’s no point planting a new tree in the midst of a construction site so, the day I get to breathe flower blossoms into my nostrils on my own property is still in the distant future. It’s a good thing I’m [relatively] patient. 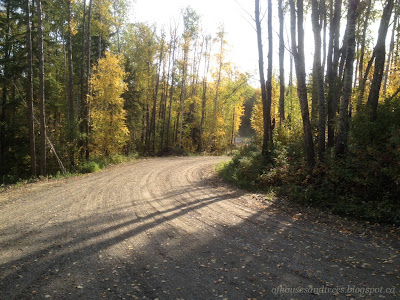